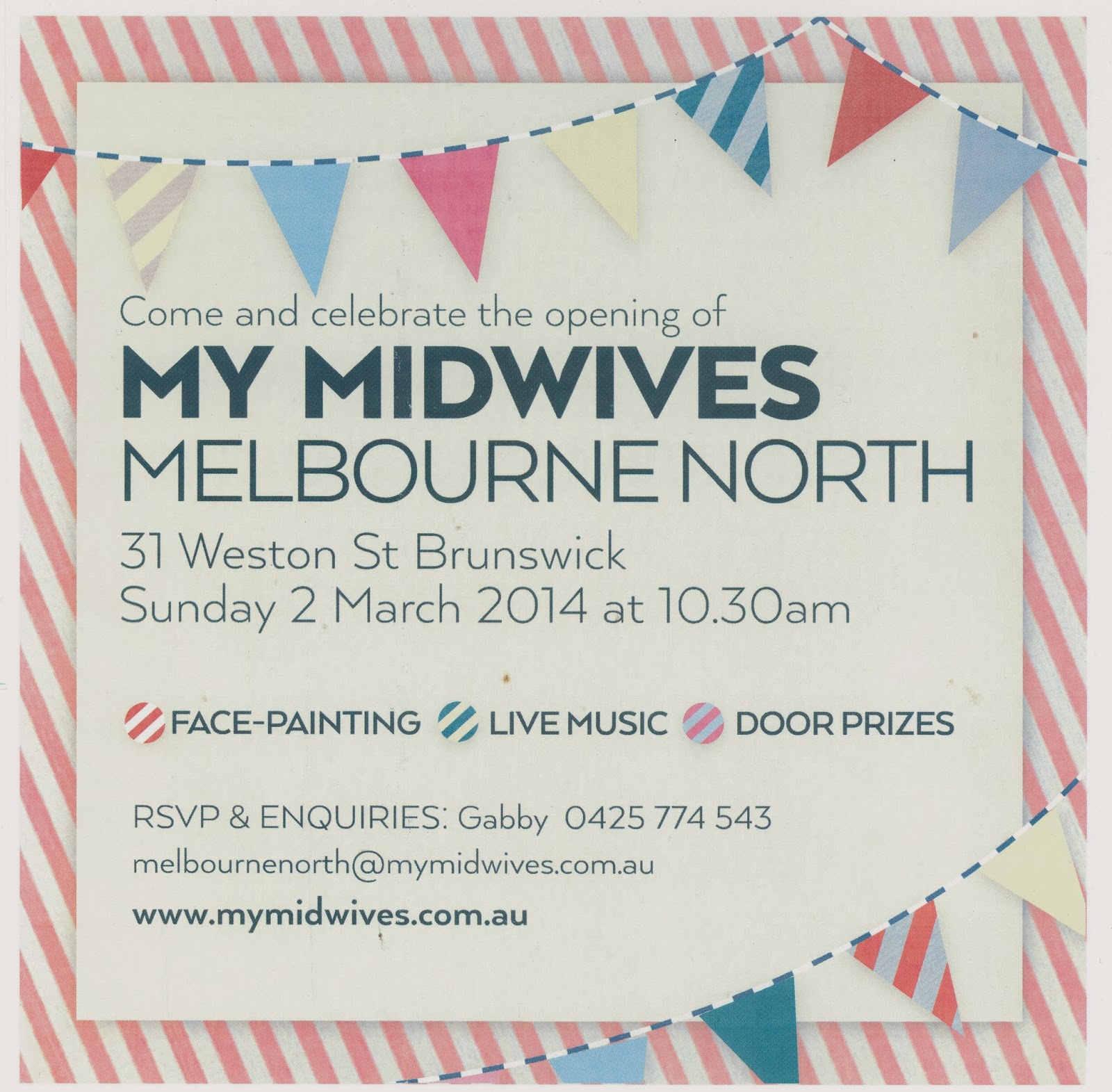 The My Midwives premises at 31 Weston St Brunswick has been fitted out especially to create a warm and inviting community hub for pregnant women and families in the early post-natal period.  The services offered will include Medicare rebateable pregnancy and postnatal care, lactation services, antenatal education, pre and postnatal yoga and a range of complementary therapies.
Enquiries:  Gabriella Piemonte 0425 774 543    Hannah Quanchi   0400 564 103
Posted by Joy Johnston at 9:46 PM No comments: Links to this post

Women have written and told their birth stories, and shared their birth pictures for as long as I can remember.  Birth stories have been a significant part of the natural birth movement, as women have claimed ownership and responsibility for their life decisions, including decisions related to maternity care.  Since the advent of the wonderful www, birth stories have been placed on websites, forums, blogs, and other social media sites.  A quick review of the midwives websites linked to this page tells us that many midwives have 'Birth Stories' as one of the features of their sites.

A new revised version of the NMBA guideline for advertising regulated health services, to come into effect next month (March 2014), appears to prohibit the publication of birth stories by midwives, or by others who may (intentionally or not) link a midwife to the story.

There are a number of independent websites that invite public feedback/reviews about a patient’s experience of a regulated health practitioner, business and/or service. These websites are designed to help consumers make more informed decisions and increase transparency of interactions.

A review is not considered to be a testimonial or purported testimonial, in breach of section 133 (1)(c) of the National Law when it only comments on non-clinical issues, regardless of whether it is positive, negative or neutral.

Reviews must not contain statements about the quality of clinical care received from the regulated health practitioner, business and/or service.

A practitioner must take reasonable steps to have any testimonials associated with their health service or business removed when they become aware of them, even if they appear on a website that is not directly associated and/or under the direct control or administration of that health practitioner and/or their business or service. This includes unsolicited testimonials.

‘Reasonable steps’ include taking action in the practitioner’s power, such as directly removing, or requesting removal, of the testimonials. For example, a review on a social media site that states ‘Appointment ran very late and magazines were old’, is not considered a testimonial as it makes no reference to the clinical care provided by a regulated health practitioner, business or service. However, a review on the same social media site that states ‘Practitioner was quick to diagnose my illness and gave excellent treatment’, is a testimonial which references clinical care and is considered in breach of the National Law.

Once the practitioner becomes aware of the testimonial, they must take reasonable steps to have the testimonial removed (also refer to Section 7.1 on social media).


This new guideline appears to prohibit birth stories either on the midwife's website or somewhere else. "Testimonials in advertising include ... 2. the use of patient stories to promote a practitioner or regulated health service" and "a testimonial which references clinical care and is considered in breach of the National Law." There are some lovely birth montages and videos on youtube that give a visual promotion of the birth - including pictures of the midwives and reference to their names.  Are these also in breach of the law?Perhaps it could be argued that a birth story or montage (on the midwife's site or someone else's) is not being used to *promote* the practitioner; rather to educate the public. I don't think this argument would hold. Midwives are in business, and businesses promote themselves because the only way they can keep going is if they make enough money.  It seems to me as though there is a problem with this very inclusive definition of the word 'testimonial'. Surely a person's story of their own birth is theirs to tell or not? The guideline says "Testimonials can distort a person’s judgment in his or her choice of health practitioner."

Perhaps this sort of restrictive guideline is appropriate in health related services that may be seen to prey on people's vanity: expensive medical or surgical treatments that are carried out, with little chance of lasting effect on health or wellbeing?   Perhaps this is an instance in which the midwife is different from other regulated health practitioners?

It would appear that the strong arm of the law is being used as 'Goliath' against the 'David' of the natural childbirth movement.  Natural childbirth is unique in the spectrum of health care: it requires the woman to do *it* herself!  There are no shortcuts, no special breathing techniques, no therapies, no magic words or products to be bought, that make natural childbirth better than it already is.

Would the birth story of a woman who wanted to give birth naturally after a previous caesarean be able to 'distort a person's judgment' about the professional capacity of the midwife?  Surely there is benefit to the public in being able to consider the events and decisions that led to the birth of a baby?

If birth stories (aka testimonials, under the revised guidelines) really can distort a woman's judgment in her choice of midwife, would it not be more reasonable to require a disclaimer to be displayed with birth stories, warning the public about this risk?  By removing birth stories from publicly accessible sites, are we returning to old ways, speaking only of such things in hushed tones behind closed doors?  Surely that is not appropriate in today's world.

Disclaimer:
Opinions expressed in this article are those of the author, Joy Johnston.

Posted by Joy Johnston at 4:10 PM 2 comments: Links to this post

What medicines are midwives prescribing nationally?

Please note:
If you are a midwife prescriber in Australia, you are invited to contribute to this survey.

There is a high degree of enthusiasm amongst midwives who have achieved endorsement as prescribers.

The Midwife prescriber facebook group facilitates discussion about prescribing issues.  The group welcomes members who have the eligible midwife prescriber endorsement, and those who are working toward it, and others who have a strong interest in the subject. At the time of writing there are 130 members.


Read more »
Posted by Joy Johnston at 9:00 AM No comments: Links to this post

A group of mipps at a study day

Our email address is mipps@maternitycoalition.org.au

MiPP is a collective of independent midwives in Victoria, and a participating organisation in Maternity Coalition http://www.maternitycoalition.org.au

Midwives choosing to work privately, rather than being employed by hospitals, do so because it allows us to be flexible about the care we provide. We offer one-to-one primary care, which enables the woman and her midwife to establish a partnership based on trust and reciprocity.

Midwives who are interested in extending their practices to include a caseload and homebirth, whether as independent (self-employed) practitioners or as employees of a maternity service, are welcome to join in with MiPP activities. If you have a blog or website that you would like linked to this blog, or have other questions, please get in touch.

Thankyou for visiting this blog. I hope you will find it informative and useful. If you want to contact me by email, rather than leaving a message in the comments section of the blog, please do so joy@aitex.com.au.
Joy Johnston