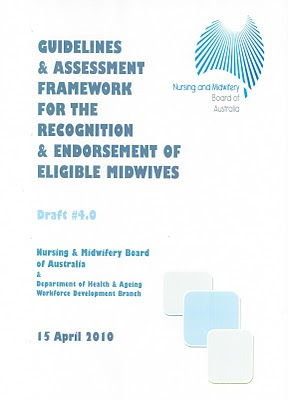 Comments by readers are welcome.
Comments can also be read at other midwives' blogs - see Lisa Barrett's blog.
Posted by Joy Johnston at 10:50 AM No comments: Links to this post

I like to think that woman centred care and midwife led care are two sides of the same coin: that ideal of best practice - the midwife using her skill and knowledge in a way that results in optimal care and best outcomes for the mother and her child, and through them, to the community.

What do we really mean by woman centred care?

Or by midwife led care?

Are midwives just power hungry, demanding their slice of the pie claiming a 'right' to being at least one of the professional care providers that women are able to choose from?


Stepping back momentarily from midwifery, and speaking as a woman who wants only the best for women and babies, I can confidently argue that services offering primary maternity care that
...
are indeed as close to optimal maternity care as is humanly possible to imagine.

And the good news is that the person who is able to provide this whole package is the midwife. Not any midwife, but the midwife who commits to being with that individual woman, establishing a partnership based on trust, and (literally) LEADING and guiding the woman as she negotiates her personal maternity care.  That midwife makes decisions, with the woman, about critical directions in the journey.

A recent Science and Sensibility blog post by Amy Romano, titled
What’s Behind the Cochrane? (or…, “The Good News About Midwives Gets Better!”) explores 'gold standard' research in maternity care. When we look at the best research evidence into models of maternity care, we can conclude that optimal care is midwife led care. That means a woman has a known midwife who not only provides the primary service throughout the pregnancy, birthing, and postnatal phases; who is the responsible professional in attendance at birth; and who accesses/ refers to specialist services when and if required.

Amy Romano warns:
"Women often believe that going to an obstetrician practice that employs midwives is getting “the best of both worlds.” The Cochrane review of midwife-led care in fact tells us that such arrangements are ineffective, inefficient, and may be hazardous to the health of women and babies."


This warning should not be dismissed lightly.  Although this is written to a predominantly North American audience, it's as relevant in Australia.  We hear and read of women who book with a particular obstetrician who has a name for vaginal births, and that he encourages to have a personal attendant in the form of a doula.  Yet the evidence supporting that model is no where near as strong as the evidence supporting midwife led care.

The Cochrane reviews offer the highest level of reliable research that is available to the medical community today. Yet the availablity of midwife led care is shockingly poor in this country. Our health bureaucrats and advisors to policy makers take the liberty of cherry picking certain evidence, while conveniently ignoring the evidence supporting midwife led maternity care.

Australian maternity care and health are undergoing unprecedented reform at present. What comes out the other end of the reform process is anyone's guess. What is clear is that it will be top-heavy with bureaucracy. On this particular issue of midwife led care, the NHMRC Collaborative Guidance has discretely avoided mention of midwife led care with the statement:

"9. Collaboration aims to maximise a woman’s continuity of carer by providing a clear description of roles and responsibilities to support the person that a woman nominates to coordinate her care (her ‘maternity care coordinator’)."


Readers might reflect on the difference between a midwife who has a role as professional leader of the care, and that of care coordinator.

A colleague has recently written "The most important idea I had [in responding to the NHMRC document above] is to change the language from Women Centred Care to Women LED care. If this is successful then all the blah about respecting autonomy and legal rights is an academic exercise - think about it. I keep thinking that the woman is surrounded in the centre!."

I have to disagree.  Woman LED care negates that time-honoured and valued role of the midwife.


As I worked with a young woman in labour the other night, progressing very slowly through first stage, I needed, on occasion, to take the lead. I knew what needed to happen, but I could not do it for her. Her partner and I would dearly have loved to be able to do something that relieved her exhaustion, stopped her vomiting, allayed her fears, made her bearing down more effective ... . As the responsible professional I asked myself several times if we had crossed a line; if would need to go to the hospital. I wrote the letter of referral - a letter that did not get used. It was all there in black and white: labour commenced many hours previously, after more than 24 hours' rupture of membranes; we had experienced difficulty maintaining adequeate hydration; the contractions became less frequent than is usual. Yet this strong woman continued to progress, and her baby showed no sign of distress. Baby was born beautifully, at home.

This birth tested the partnership of a woman and midwife. The midwife leading the care enabled the woman to experience a natural event that was outside anything she had ever previously imagined. The midwife trusting the woman, and the woman trusting her midwife allowed a decision making process that put the woman/child at the centre of the care, and enabled success in a marathon that takes more physical and emotional strength than either woman or midwife know they have.

Yet in completing that endurance course, the mother and baby are strong in mind and body. That is the outcome we are wanting. It is not easily achieved, but it is precious and worth working for.
Posted by Joy Johnston at 5:10 PM No comments: Links to this post

Croakey on the AMA

Readers of this blog may remember previous links to CROAKEY, the health blog of the independent news reporting organisation CRIKEY.

Here's a new post, focusing on the Australian Medical Association (AMA), and its claim that its president Dr Andrew Pesce, should be seen as the “Chief Health Policy advisor to all political parties”.

This is not the first time Dr Pesche has assumed the role. His influence on Health Minister Roxon in the report of the Maternity Services Review and subsequent legislation, particularly in requiring midwives to have 'collaborative arrangements' with doctors, is already on the record.
Posted by Joy Johnston at 10:49 AM 2 comments: Links to this post


This year’s World Health Day theme addresses the challenges surrounding the growing urban population. The World Health Organization is calling upon cities across the globe to be counted among the “1000 cities” dedicated to improving the health in urban areas.
The Challenges
• Virtually all population growth over the next 30 years will be in urban areas.
• The urban poor suffer disproportionately from a wide range of diseases and other health problems.
• The major drivers of health in urban settings are beyond the health sector.
• Actions and solutions exist to tackle the root causes of urban health challenges.
• Build partnerships with multiple sectors of society to make cities healthier.

Breastfeeding: A Paradigm for Change
What role might breastfeeding play in addressing the challenges and offering at least a partial solution?
... [read more]
Posted by Joy Johnston at 7:17 PM 1 comment: Links to this post

An Extraordinary General Meeting will be convened 21 April via Teleconference.

For more information, or to join Homebirth Australia, go to the website.
Posted by Joy Johnston at 7:53 AM No comments: Links to this post

A group of mipps at a study day

Our email address is mipps@maternitycoalition.org.au

MiPP is a collective of independent midwives in Victoria, and a participating organisation in Maternity Coalition http://www.maternitycoalition.org.au

Midwives choosing to work privately, rather than being employed by hospitals, do so because it allows us to be flexible about the care we provide. We offer one-to-one primary care, which enables the woman and her midwife to establish a partnership based on trust and reciprocity.

Midwives who are interested in extending their practices to include a caseload and homebirth, whether as independent (self-employed) practitioners or as employees of a maternity service, are welcome to join in with MiPP activities. If you have a blog or website that you would like linked to this blog, or have other questions, please get in touch.

Thankyou for visiting this blog. I hope you will find it informative and useful. If you want to contact me by email, rather than leaving a message in the comments section of the blog, please do so joy@aitex.com.au.
Joy Johnston